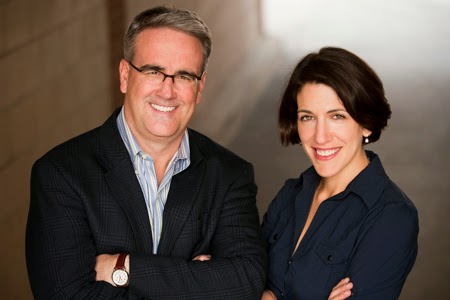 Red Arrow Entertainment Group has acquired a majority stake in Half Yard Productions, the indie behind Say Yes to the Dress and American Loggers, for an undisclosed sum.

Half Yard, which was set up in 2006, will continue to be led by founders Sean Gallagher and Abby Greensfelder (pictured above), who will serve as co-CEOs. The indie will sit in a portfolio alongside Red Arrow’s other U.S. acquisitions – Kinetic Content, Fabrik Entertainment and Left/Right Productions.
In addition to Loggers and Say Yes, Half Yard also produces I Found the Gown and Randy to the Rescue for TLC; Diggers for Nat Geo; How the States Got Their Shapes for History; and Hillbilly Handfishin’ for Animal Planet.

Red Arrow Entertainment Group MD Jan Frouman said: “We continue to be bullish on the U.S. production market – but we always balance bullishness with caution and selectivity. We want the right partners with the right mindset.

“It didn’t take us long to realize that Abby and Sean would be great additions to the group. We’re thrilled they felt Red Arrow would be the right home for Half Yard’s next chapter.”

In a joint statement, Greensfelder and Gallagher added: “We are incredibly proud of the team we have built in just seven years and the programs we have created and produced.

“As we looked out at our next phase of growth, we wanted to team up with the right partner who had an entrepreneurial culture that would allow us to do what we do best and help us grow domestically and internationally. We found that perfect partner in Red Arrow.”